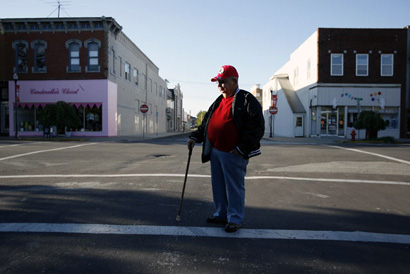 "The most important thing about being a photographer is personal vision."
—Maggie Steber at MPW.58

In the latter part of the nineteenth century an enterprising newspaper writer described the city of Moberly, MO as 'magically springing from the prairie' with the arrival of the Wabash Railroad Shop in 1873. Nearly a century and a half later the sound of freight trains still reverberate off the brick-walled downtown buildings and Moberly still touts itself as the "Magic City."

During the last week of September 2006 a band of 30 photographers, a dozen faculty and a score of student workers descended on Moberly hoping to create a little magic of their own at the 58th annual Missouri Photo Workshop. Drawn from the four corners of the U.S., and from Canada, France, Holland, Singapore, Romania and the United Kingdom, their mission was the same as their several thousand workshop predecessors. They came to sharpen their story-telling skills while collecting images that spoke to the essence of community and explored the lives of, and the issues facing, the people who inhabit small town America.

Photographers explored local institutions like a men's clothing store owned and operated by the same family for three generations and a barbershop run by a brother and sister. Other subjects ranged from the pastors of local churches to a teen parent; from a family struggling to establish an organic farm to an 80-year-old woman who runs a local food bank and collects enough food to help feed 200 families a month; from the birth of a baby boy to a hospice nurse helping patients and their families deal with end of life issues. With their images, this group of photojournalists strove to chart a course to the heart of this community.

The week culminated with a public exhibit of over 300 photographs at the Moberly Municipal Auditorium, where photographers mingled with their subjects and neighbors learned a little more about each other.

The people of Moberly opened their hearts and their lives to the participants of MPW 58 — a truly magical gift for which we will be forever grateful.

History of the Missouri Photo Workshop

The roots of the Missouri Photo Workshop are embedded firmly in a half-century of rich tradition; current workshops carry on principals present from the beginning.

When the late Clifton C. Edom of the Missouri School of Journalism founded the Missouri Photo Workshop in 1949, he too, looked to the past to map the path for photojournalism's future. Inspired by the gritty, content-rich photographs of the documentary photo unit of the pre-WWII Farm Security Administration, Edom promoted research, observation and timing as the methods to make strong story-telling photographs. FSA director Roy Stryker and photographer Russell Lee worked closely with Edom in the creation of the Workshop and served as faculty members during its early years.

In subsequent years, faculty members have been many of America’s leading newspaper and magazine photographers and photo editors; a roster of faculty and students reads like a Who’s Who of photojournalism. Faculty of today includes some of the most energetic, productive and articulate documentarians currently working. All are experts dedicated to passing on the fundamentals of photo research, shooting and editing to those who hope to carry on these values and techniques in the future.

"Show truth with a camera. Ideally truth is a matter of personal integrity. In no circumstances will a posed or fake photograph be tolerated."