MPW.57 Behind the Scenes is coming Soon!

"Don't go for the easy story. Find something that challenges you, that scares you."
—Lois Raimondo / MPW.57 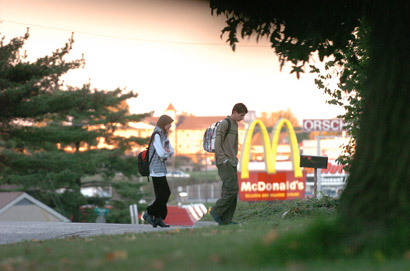 "Remember, it's their story, not yours. It's an honor to be let into someone's life, we need to know
that and respect it"
—Melissa Farlow at MPW.57

Salt was what first attracted settlers to the tall grass prairie nestled in a big bend of the Missouri River that would become the city of Marshall in 1839. What attracted a wave of people to the town for one week in September 2005 was the chance to hone their story-telling skills at the 57th Missouri Photo Workshop.

These newcomers included 41 photographers, a dozen faculty, and a score of student workers. They traveled from the four corners of the U.S., and from Canada, Australia, Germany, Italy and South Korea. They found a town surprisingly similar to what their predecessors discovered at the 19th MPW in 1967: a city of 12,000 souls, with an economy based on agriculture and a fairly diverse manufacturing base.

Some things had changed; a growing Hispanic population was now adding to the labor force and trying to find its place in the community. But this band of photojournalists was welcomed with the same sense of warmth and openness as their predecessors.

The week culminated with a public exhibit of nearly 300 photographs at the Marshall High School commons, where photographers co-mingled with their subjects and neighbors learned a little more about each other. The intimate and insightful stories developed during the week spoke eloquently about the present-day community. A sense of history was added with the display of the exhibit from 1967 and current residents scanned those photos hoping to find images of friends, neighbors, relatives and maybe even themselves.

The people of Marshall opened their hearts and their lives to the participants of MPW 57. For that we will be forever grateful.

History of the Missouri Photo Workshop

The roots of the Missouri Photo Workshop are embedded firmly in a half-century of rich tradition; current workshops carry on principals present from the beginning.

When the late Clifton C. Edom of the Missouri School of Journalism founded the Missouri Photo Workshop in 1949, he too, looked to the past to map the path for photojournalism's future. Inspired by the gritty, content-rich photographs of the documentary photo unit of the pre-WWII Farm Security Administration, Edom promoted research, observation and timing as the methods to make strong story-telling photographs. FSA director Roy Stryker and photographer Russell Lee worked closely with Edom in the creation of the Workshop and served as faculty members during its early years.

In subsequent years, faculty members have been many of America’s leading newspaper and magazine photographers and photo editors; a roster of faculty and students reads like a Who’s Who of photojournalism. Faculty of today includes some of the most energetic, productive and articulate documentarians currently working. All are experts dedicated to passing on the fundamentals of photo research, shooting and editing to those who hope to carry on these values and techniques in the future.

"Show truth with a camera. Ideally truth is a matter of personal integrity. In no circumstances will a posed or fake photograph be tolerated."

Copyright © 2005 MPW. All rights reserved.
Reproduction in whole or in part without permission is prohibited.